René Magritte was born at the very end of 19th century in Lessines, Belgium. He displayed great talent and interest in the arts at an early age, and in 1916 he enrolled at the Royal Academy of the Fine Arts in Brussels. His first paintings were largely influenced by impressionism, futurism and figurative cubism, with the major subject of his early works being female nude. However, Magritte became world famous for his surrealistic paintings, deeply influenced by the subconscious emotions of the trauma he endured when witnessing his mother’s suicide at the age of 14.

After getting married to his childhood sweetheart in 1922 and serving in the Belgian army, Rene Magritte worked as a designer in a wallpaper factory. The year 1926 marked a turning point in his career, when a contract with a gallery in Brussels allowed him to dedicate himself to painting completely.

It is generally accepted that Magritte executed his first surrealistic painting in 1926. This early surreal work was featured at his inaugural solo exhibition in Brussels in 1927, but the show encountered rather harsh criticism. Disappointment over the show pushed Rene Magritte to move to Paris, where he got acquainted with Andre Breton and joined the surrealist movement officially. Over three years of his life in Paris, Rene Magritte grew into a leading figure of the movement, exhibiting an illusionistic and conceptual version of surrealism. Still, his work was not widely recognized yet, and he was compelled to return to Brussels and continue working in advertising after his Brussels gallery closed and cut off his regular source of income.

Soon, the Second World War followed, which Magritte spent in Brussels. Because of the difficulty of the situation his ties to Breton, and thus the surrealists, were broken, and the painter diverted into a different representational style of vivid color for a brief period of time, reacting to the grim occupied environment he dwelled in. After the war, his style was exploring other means of expression, but by the end of 1948, Magritte returned to surrealism definitely. His particular form of surrealism will continue to develop until the end of his life.

On August 15 1967, Rene Magritte died of pancreatic cancer in his own home in Brussels, at the age of 68.

Surrealistic paintings of Rene Magritte set foundation for conceptual art and influenced later artistic movements, such as pop art and minimal art.
His paintings often display everyday objects in a peculiar setting, which would uncover new meanings within known things. One of the icons Magritte created is painting “The Treachery of Images”, which features a large pipe, perfectly polished and realistically depicted with a curious caption below: “This is not a pipe” – “Ceci n’est pas une pipe”. An instant oxymoron which proves itself true, since the painting is not actually a pipe, it is only a picture of a pipe – a flat, painted surface. This questioning of the representational and of the true nature of things, raised a number of questions on the nature of art and art objects, exhibiting a largely conceptual essence.
Magritte used the same pattern when depicting an apple, denying its existence. A motif on an easel is frequently repeated in his paintings, emphasizing the difficulty and the paradox of the representational nature of the art of painting.

Surrealism of Magritte is not based on principles of automatism, and it generally investigates the preconditioned ideas of reality. However, his poetic imagery is influenced by his own subconsciousness, especially repeating the motif of a veiled face – relic of a trauma of seeing his dead mother dragged out of a river, with her dress entangled around her face. He continuously plays with illusion, depicting his inner conflicts and reflections related to the death of his mother. 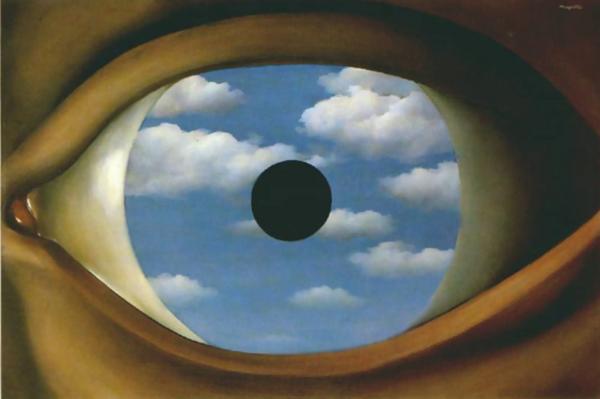 One of the most famous paintings by Rene Magritte. Here, the artists insinuates how human vision is limited, where mirror signifies a physical reflection, while the eye is the symbol of selective and subjective personal view. It is layered with meaning, as an eye can be looked by, looked through and looked in. 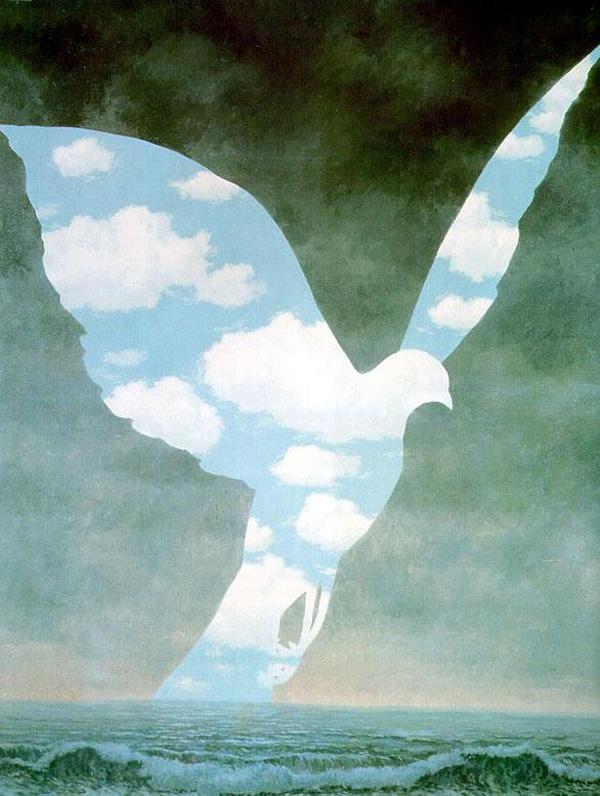 The title implies a mystery, since there is no family depicted. The explanation lies in the fact that Magritte took pleasure in confusing the public. The flying bird may be a symbol of love and harmony, evoking emotions that reflect his notion of a family. 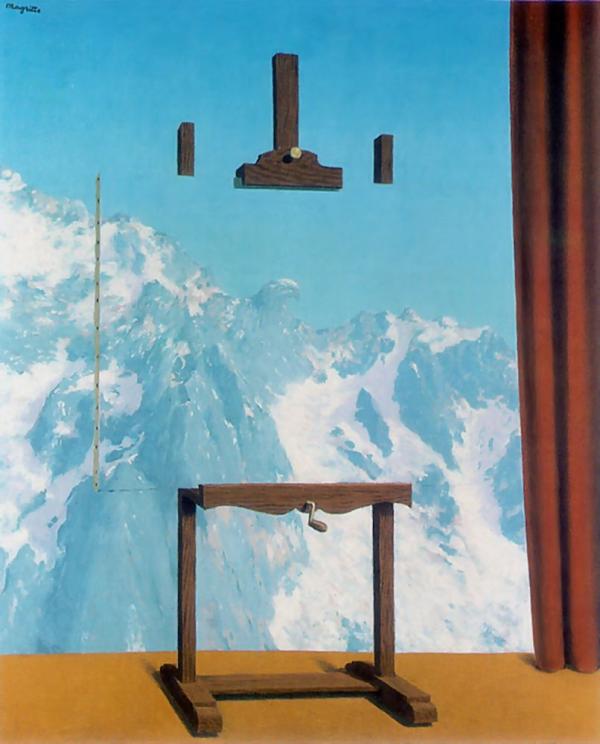 One of the typical indoor landscapes of Rene Magritte, belonging to a series of paintings with easel depicted. He enjoys playing with illusion and dual meaning of images, where the easel is the symbol or the carrier of this duality. 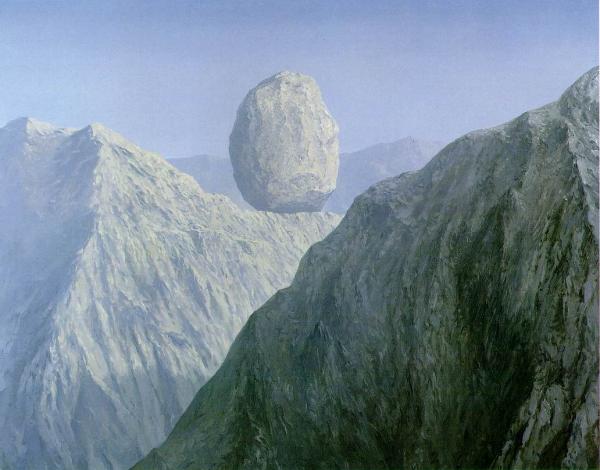 Title for this painting is borrowed from Hammett’s novel, La clef de verre. Inspired by the work of fiction, Magritte conjured a poetic dialogue of the state and the dynamism of words and images, presented by the depicted rock, title and the perplexity of their connection. 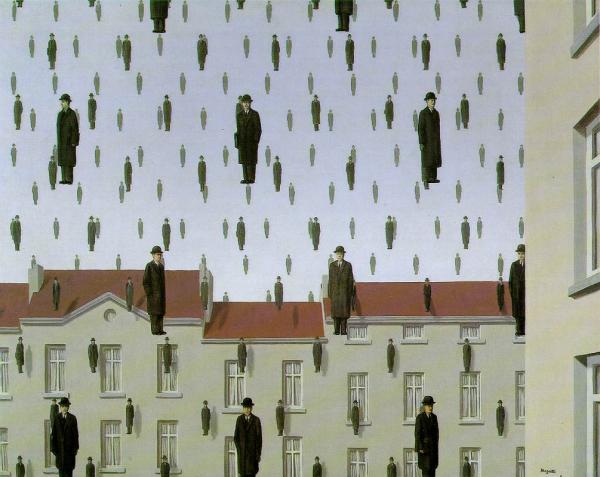 Man falling from the sky are the same bowler hat man who appears in The Son of Man. This painting represents Magritte’s exploration of individuality set against the collective, and how it is easily lost. All the men wear the same clothes, appear the same and are falling in equal manner. But are they really all identical or not? This is the core issue which makes us think over this great piece. 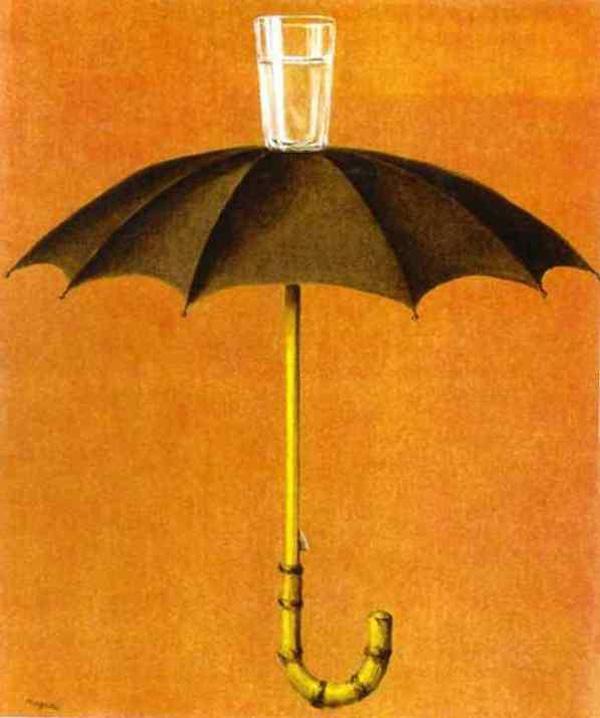 This imaginative exploration of the nature of an object inspired Rene Magritte to name the painting Hegel’s Holiday, as the artist himself wrote in May 1958 He would have been charmed, I think, or amused (as if on holiday). 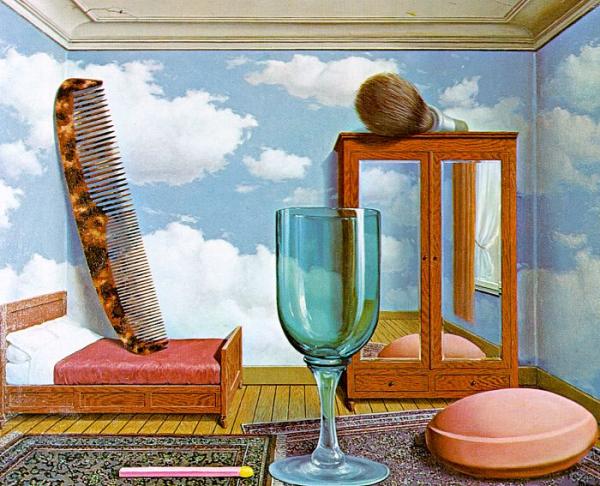 Another iconic work by Magritte. A room, packed with familiar items, all blown out of proportion, defying all common sense. The act of oversizing provides new meaning to the small, known things, making the take over the everyday and become larger than life. There are many threads of meaning in this painting, relating to every viewer Magritte’s contemporary or us, today. 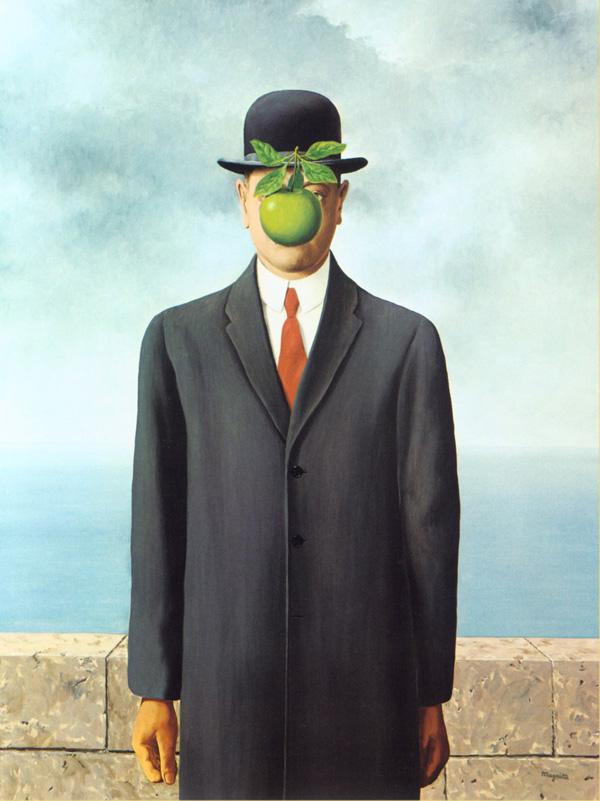 The iconic man of Rene Magritte. Who is he? Is it a self-portrait? Maybe, and maybe it is every working, average man. His face is covered with an apple, blocking his vision, which the artist explains with words: “It’s something that happens constantly. Everything we see hides another thing, we always want to see what is hidden by what we see.” 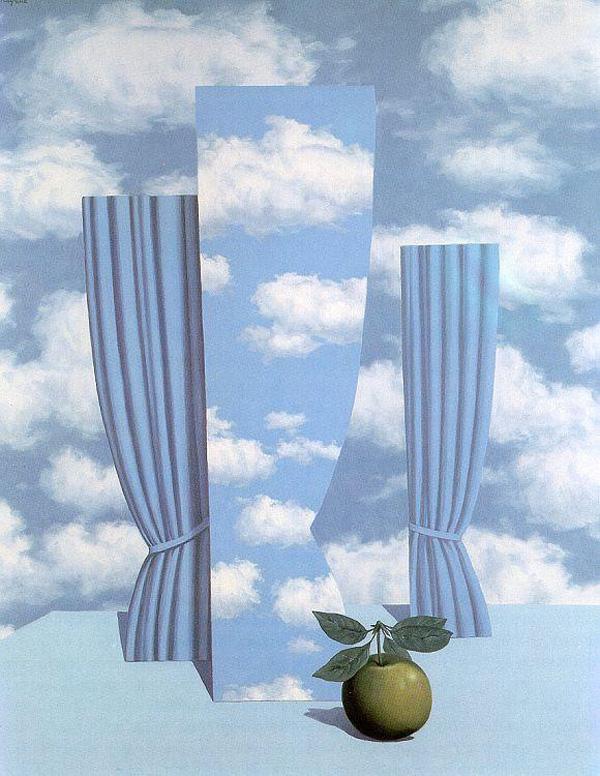 Blurring the boundaries between the interior and the exterior, this painting contains all the most known traits of Magritte’s personal iconography – the curtain, the apple and the blue sky with clouds. The beautiful world is an oneiric place, filled with symbols of things we aspire to. 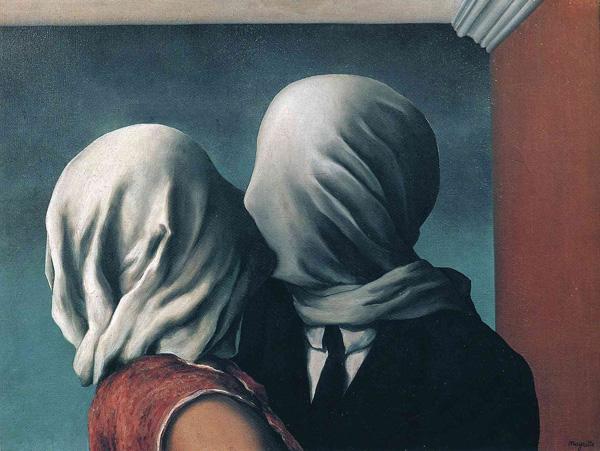 Frustration over desires appears frequently as the subject of Rene Magritte’s painting. A drapery prevents an intimate encounter between two people, transforming a love scene into a scene of dissatisfaction. The artists raises the question of how much do we really know other people, even the ones closest to us.
Iconography derives from his childhood trauma of witnessing his dead mother being dragged out of a river, with a veiled face. 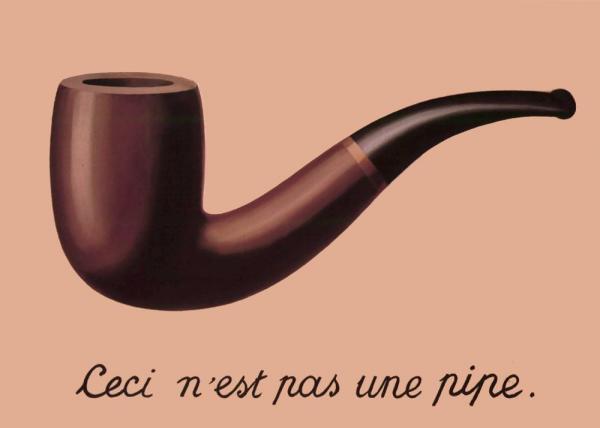 The Treachery of Images

Probably the most famous painting of Rene Magritte and definitely the most revolutionary. About this emblematic image, the artist said” “The famous pipe. How people reproached me for it! And yet, could you stuff my pipe? No, it’s just a representation, is it not? So if I had written on my picture “This is a pipe”, I’d have been lying!” 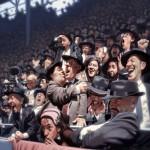