One of the greatest memories we could have from childhood is watching an array of cartoons played on the television. More often than not these cartoons accompany us during the early hours of the weekend before we go out to play with friends. 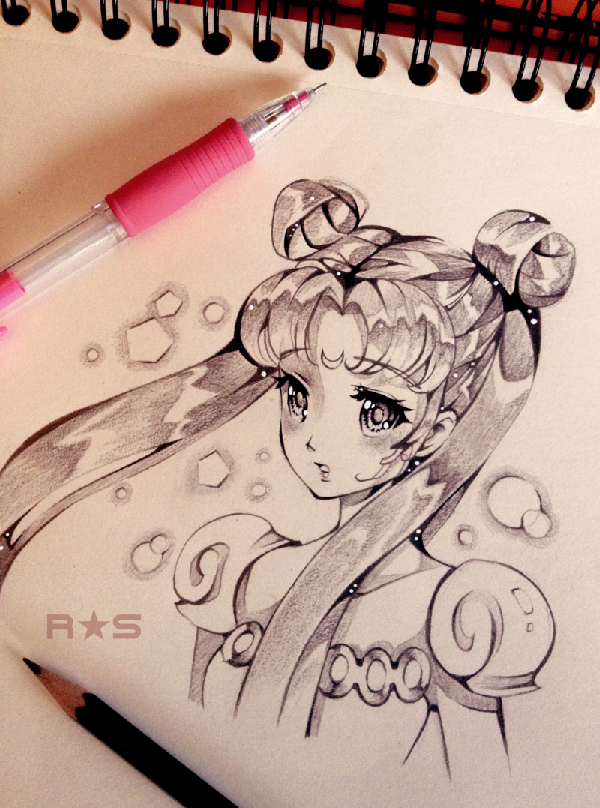 Amazing traditional art by reiraseo. Only using a ballpoint pen, the carious ink shading used on this traditional art is very impressive. The contrasting soft and hard shadowing also adds to the illusion of a dreamy background surrounding Sailor Moon.

However cartoons weren’t the only ones dominating the world of television in the 90’s, Japanese animation or Anime had also started making its way into western television. Among the first Anime that has been aired outside of Japanese television was Sailor Moon. It had the original title of Bishōjo Senshi Sērā Mūn (美少女戦士セーラームーン) or Pretty Soldier Sailor Moon. In later events the title was eventually changed to Pretty Guardian Sailor Moon.

Sailor Moon was first serialized in Nakayoshi with 18 volumes from December 28, 1991 to February 3, 1997. It was written and drawn by Naoko Takeuchi. It was targeted directly for young girls (Shoujo) thus it was expected to be full of pretty girls, magic, talking cats and an overall good vibe. It later became popular and had its own Anime version produced by Toei Animation.

So what makes this shoujo manga stand out from the rest? It follows the life and daily adventures of Usagi Tsukino, a simple high school girl who finds herself with magical powers that enable her to transform into-of course-Sailor Moon. Her main goal is to search for a princess and the Legendary Silver Crystal. She is aided by a magical cat her fellow Sailor Guardians in order to fight evil and prevent the total destruction of the Solar System.

A really notable fact about the characters is how they were named from the planets revolving around the Solar System. It might have been a great idea before as kids would then have grasp of the planets names and Science would be a much less difficult subject to handle. Apart from that there is also an interesting array of villains that can keep the viewers entertained.

In the later part of the series additional characters and their true identities have been slowly unfolded such as the mysterious Tuxedo Mask, Chibiusa’s real identity, two more Sailor Guardians appear (apart from the five main Sailor Guardian characters) and even an elusive Sailor Pluto. These and more characters give color to the story which is why we can’t blame kids before on being hooked on this Anime. As if the magical transformation was not enough, Sailor Moon is eye candy and every little girl’s dream of becoming one day; a cute magical girl who can save the world.

It seems like we’re talking about the past so let’s fast forward to 2014, what’s the significance? It’s because Sailor Moon has been rebooted for a 2014 comeback and is now called Sailor Moon Crystal. This time, the plot is heavily based on the original shoujo manga. When asked about the major difference on the old Sailor Moon versus the reboot, the art style is definitely noticeable. The 90’s version had a more childlike appearance, while the 2014 version gives the Sailor Guardians a more mature and ladylike look, and also, the animation is also more fluid in the latter. 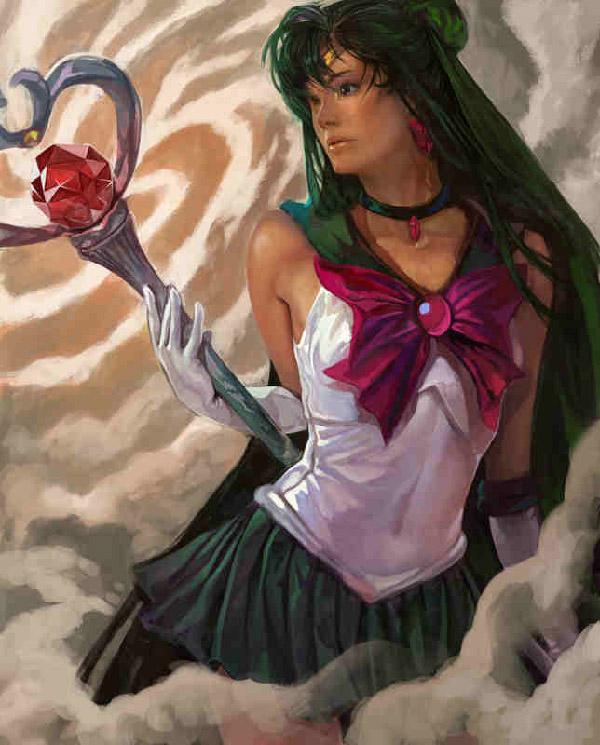 Artist k-BOSE has given Sailor Pluto a rather mature look in this art. The tanned skin and mature features gives the impression that sailor Saturn knows how to fight evil and still maintain a super model like bod. 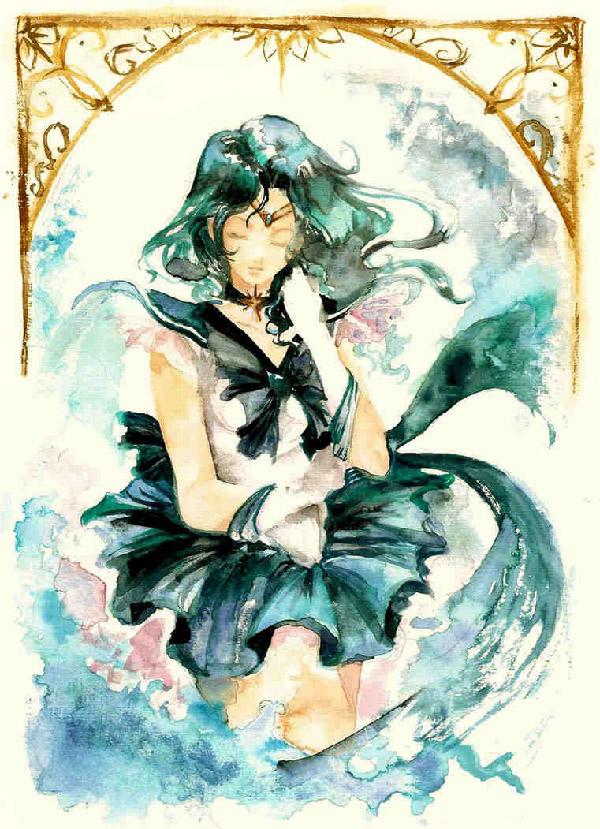 Washed out and playing with the shades of green. An awesome piece by Spelarminlind.Green is what represents Sailor Neptune and having all these shades come together to create her is simply amazing. 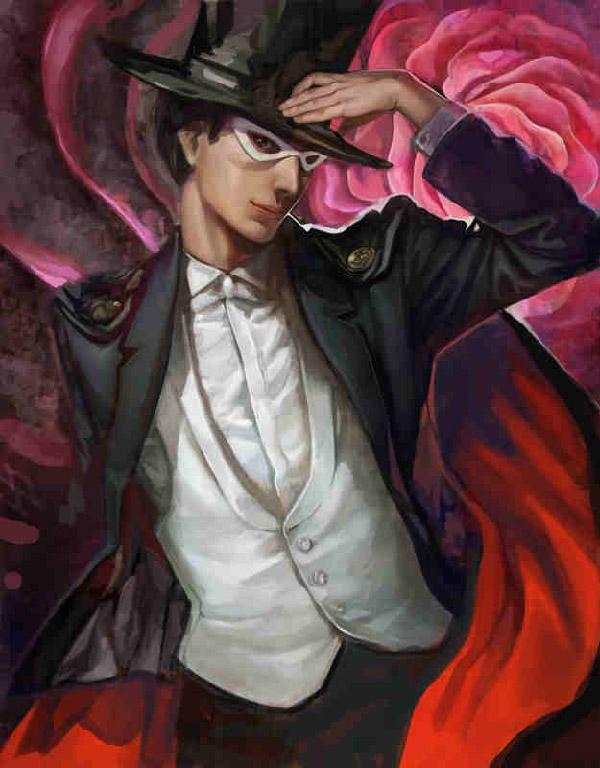 The only male in Sailor Moon that isn’t a villain or a bystander. In this realistic art by k-BOSE, Tuxedo Mask is given a touch of realism and at the same time a playful pose that simply fits his personality. 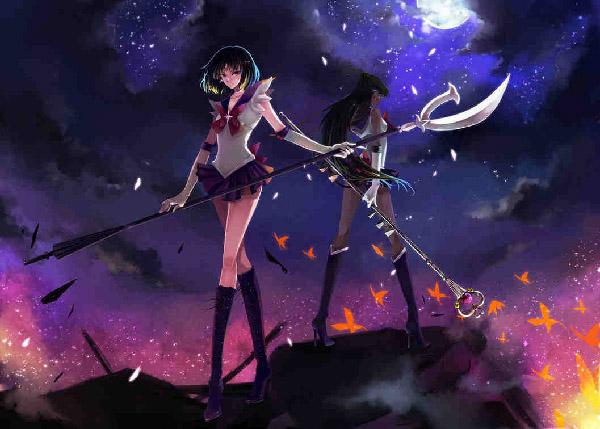 Partners in crime Sailor Saturn and Sailor Pluto art by nako-75. The seemingly dark background and aura of the setting might give you the impression that these two are villains. They are not however, they are shrouded in mystery but are generally good guys. 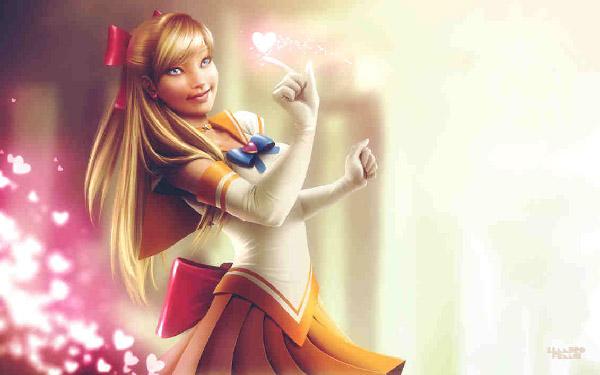 Sailor Venus by lenadrofranci, where she looks somewhat like a combination of Disney and Anime with a hint of cuteness. The cute pink hearts that follow Sailor Venus look great as it gives us the impression that she is a fun loving and sweet girl. 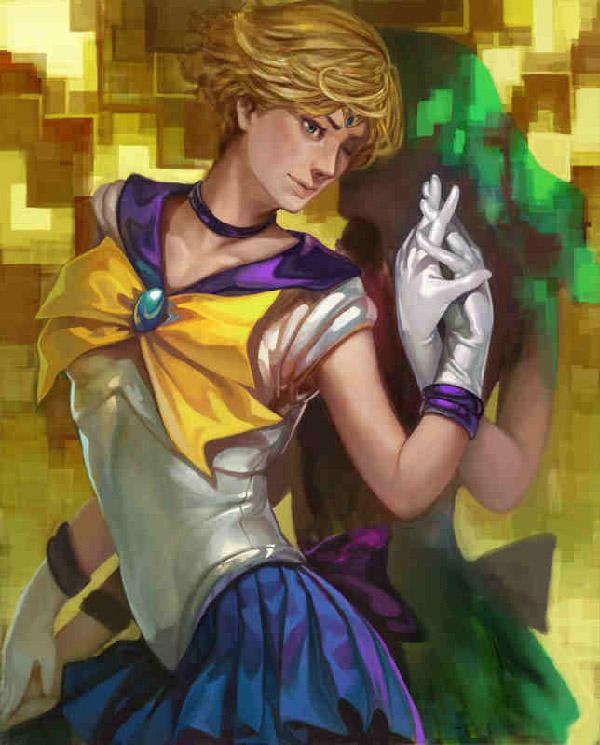 Using a watercolor paintbrush for this digital art by k-BOSE, it is still able to capture the digital pixelation behind Sailor Uranus. The silhouette of Sailor Neptune can be somewhat seen and the painting effect of the art proves to be perfect for her shadowy figure. 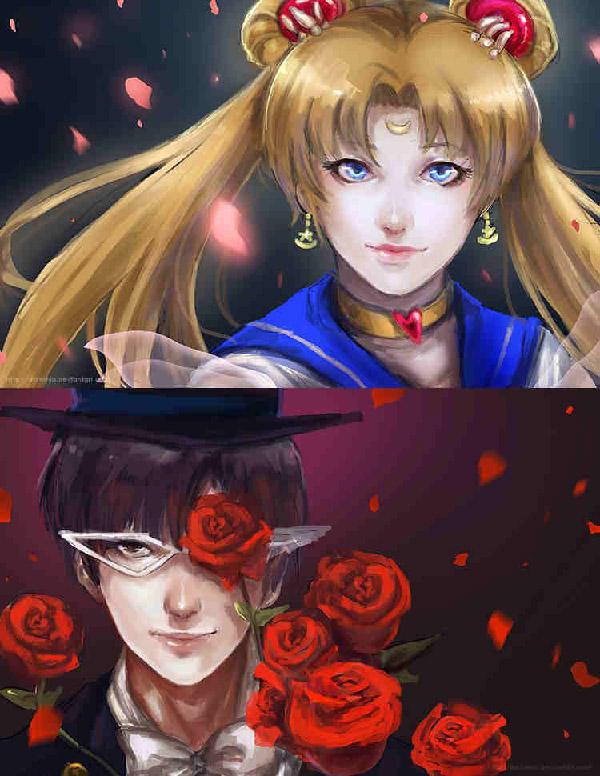 Looking like star crossed lovers, the artist by darkshia did a very good job in connecting the rose petals from Tuxedo Mask to Sailor Moon. On the other the different colors of the rose petals represent the personality of each one. Beautiful but deadly. Artist “R” has done a fantastic job in giving life to Sailor Mars as she strikes a pose and looks back at her enemies with her powers glistening around her. A very modern and adorable art by damn-it-sammit. It shows Luna, the magical cat standing proudly. The quick strokes of her eyes, whiskers and fur adds to the humor and candidness of the art. 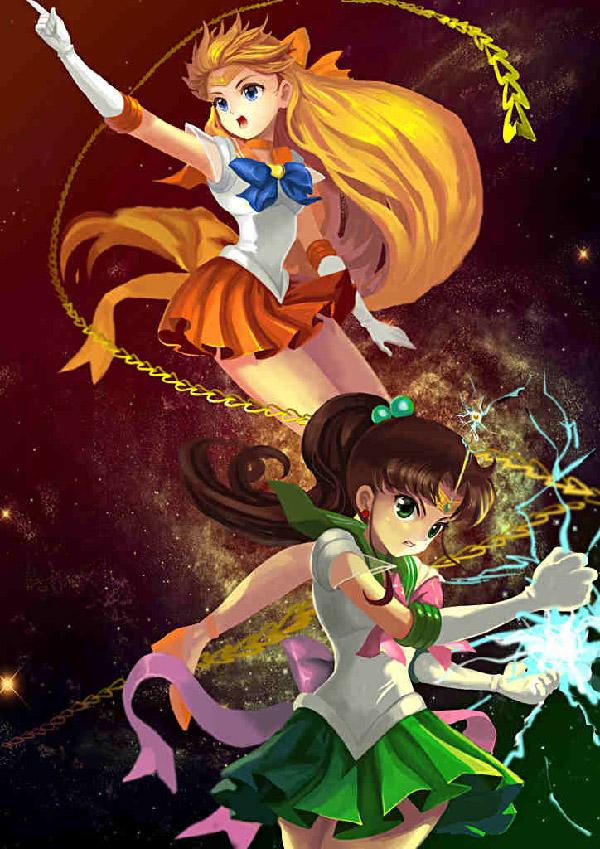 Fighting side by side as drawn by amg192003. Sailor Jupiter and Sailor Venus show off their abilities and powers in this illustrations as well as how nasty they can get in battle. 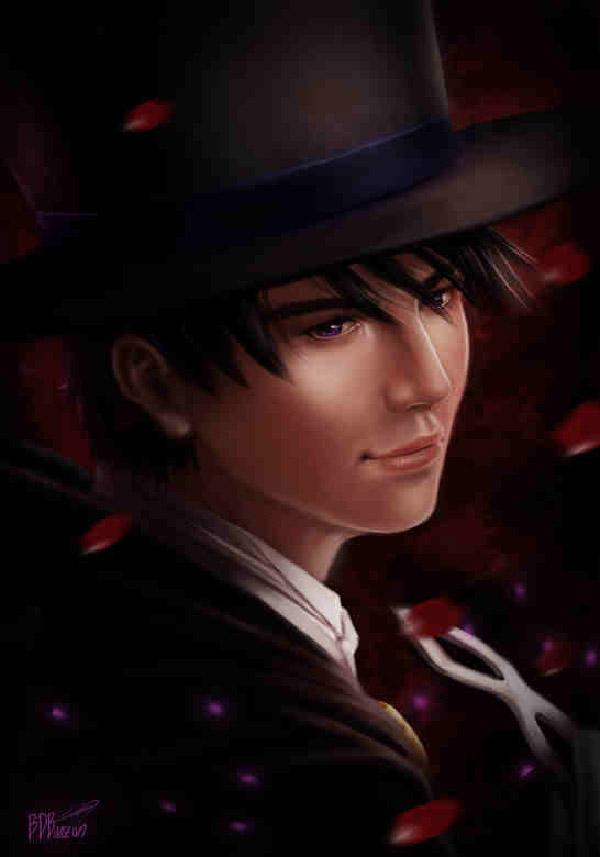 Realistic drawing of Tuxedo Mask by BDBonzon. The soft edges and colors used in the drawing gives off the vibe that Tuxedo Mask is very caring and gentle on the inside.

Casual, bright and appealing to the eyes. The colors used by the artist ４Ｂ does wonders on making us stare at the drawing for long without getting tired of it.

Sailor Moon being cute as always! As imagined by トガシ＠仕事受付一時停止 on Pixiv. Blushing and somewhat giggling, it gives is the impression of a childlike and innocent girl that has been tasked to save the world.

Usagi and Chibiusa art by Pixiv artist by IKU♥1539. Both characters look wonderful and compliment each other with their hairs intertwined thus creating a frame for the drawing as well. 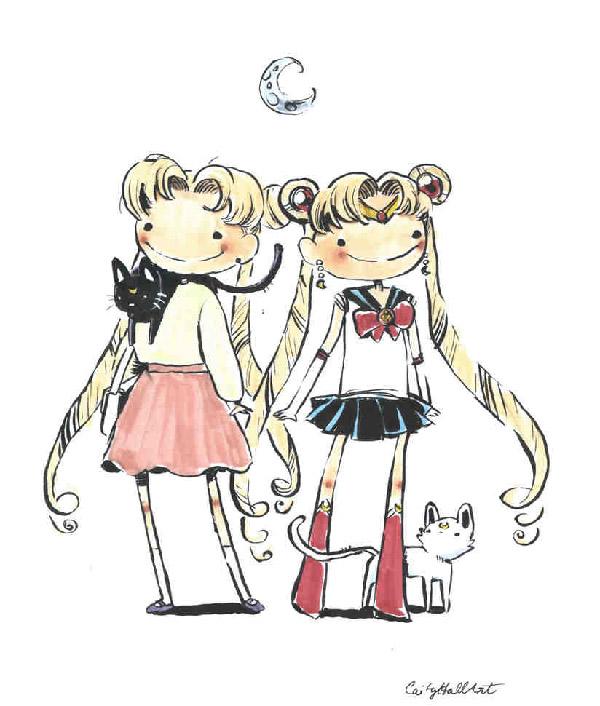 Simple, cute and adorable Usagi art by CaityHallArt. it features both the normal Usagi and the magical girl Usagi. They may live separate lifestyles but in the end of the day Usagi is still Usagi. 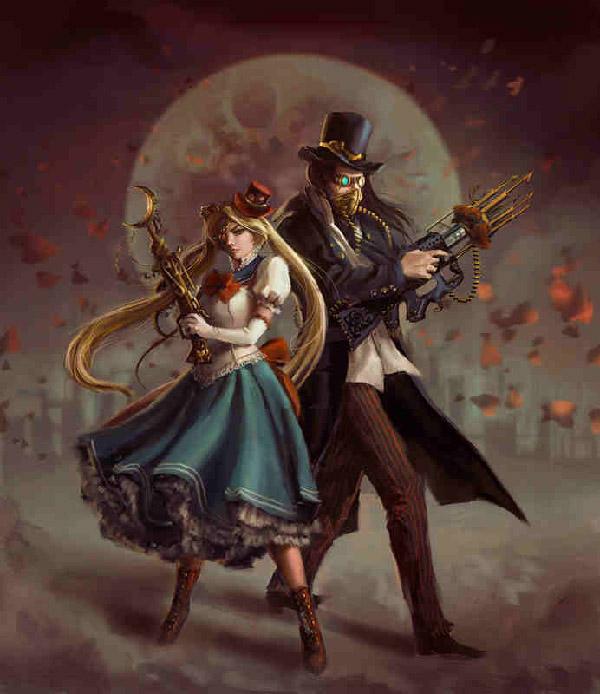 When it comes to alternate universe, this very creative art by anotherwanderer would take the bag. Sailor Moon and Tuxedo Mask are both depicted as to live in the Steampunk environment. If Sailor Moon had an almost 3D version then this one would take the cake. A fantastic art by Majesteux that has an overall feeling of content and perfection. A manga-ish depiction of Sailor Moon by artist lValShe. Sailor Moon here is in her Super Sailor Moon form and is confidently posing before she enters battle. Epic art by TholiaArt featuring all the Sailor Guardians in all their glory and heroic poses. There’s nothing more attractive than girls showing power and being confident about it. A wonderful Sailor Saturn art by karolinanoumenon. She is shown as if she was conjuring something from the heavens to help her in a fight with evil. Sailor Mercury art by magion02. One of the Sailor Guardians, Sailor Mercury controls the element of water and is the brains of the group most of the time. Simple yet colorful. This Sailor Moon art by Crisis-Cissou combines various colors in gradient giving the character life and at the same time keeping the entire drawing clean.

Looking a bit older than her Anime counterpart, Chibiusa here is drawn by 果子狸. This illustration gives us the feeling of how Chibiusa would look in real life after a few years. Line art drawing of Sailor Moon by sureya. What makes this stand out is because of the intricate details that the artist has paid attention especially on the hair and the dress. Mysterious yet beautiful. Sailor Moon art by sunmomo. Hair clad in hints of pink and purple, it gives you a contrast of both Sailor Moon and Chibiusa at the same time. An enthralling Sailor Moon art by magion02. Sailor Moon spreading her wings and inviting you to join her in her quest to save the Solar System. A rather cute and bashful Sailor Moon in this eye catching art drawn by cherriuki. It captures the childlike spirit of Sailor Moon as well as her feminine side. A romantic night between Sailor Moon and Tuxedo mask with the moon as their witness. An amazing illustration created by moonlightYUE from DeviantArt.

Sailor Mars drawn in a cute chibi form by Pixiv artist yuminchi. The illustration uses a simple inking technique that accentuates the black and the reddish glow throughout the canvass.