Norman Rockwell was one of the most iconic American painters and illustrators depicting the ordinary American life and the burning issues in society. His unique, illustrative style presents wonderfully expressive characters, painted meticulously, almost to the photographic accuracy.

Rockwell was one of the fathers of visual identities of some of the most beloved fictional characters, such as the Santa Claus. He was a fantastically prolific painter, leaving a legacy of over 4,000 paintings, illustrations and other original works. Norman Rockwell paintings are famous for their classic aesthetics, conceptual accessibility and exemplary representations of the everyday.

Norman Rockwell was born in New York City in 1894 and since the earliest age he exhibited a strong affection towards art. He started attending art classes at the age of 14 and later he studied at The National Academy of Design and The Art Students League. Draughtsmanship he mastered during his studies will lead Rockwell throughout his career.

The first taste of success the artist had at the tender age of 16, when he executed four Christmas cards on a commission. Soon after he got his first illustrating job and began a freelance career in illustration.

At the age of 22, Norman Rockwell executed his first magazine cover for The Saturday Post, the magazine he will stay loyal to for the coming 47 years. Over these five decades of collaboration, 321 covers will be made by Rockwell for the Post.

The 1930s and 1940s are usually seen as the most prolific years in the creative path of this all-American illustrator. During this period Rockwell married for the second time and started a family, which instigated him to move to a small town in Vermont. The town was Arlington and it served as the first inspiration to the artist to begin painting his best known scenes of domestic American life.
The World War II years found Rockwell in a working state. He was deeply inspired by the fight for the right cause and by the American President Franklin Roosevelt, which led to the creation of his most emblematic painting series in 1943 entitled “Four Freedoms”. They were published consecutively for The Saturday Evening Post and followed with essays by contemporary writers. The works were shot to fame instantly, later touring the United States as an attraction and inspiration, raising over 130 million dollars for the war industry.

After the incredible success, Norman Rockwell lost his precious studio in a fire the same year. He moved to Massachusetts with the family and in 1953 his wife passed away suddenly. Still, the artist gathered his strength and published an autobiography in 1960 with the help of his son, titled “My Adventures as an Illustrator”.

The artist married for the third time in 1961 and started new working endeavor with Look magazine after his long engagement with the Post ended.

The decade of working with Look was marked by socially concerned paintings addressing issues of civil rights, poverty and space travel debut.

Norman Rockwell was the recipient of the highest civilian honor in the USA, the Presidential Medal of Freedom presented to him in 1977. He died in 1978 at Stockbridge, Massachusetts at the age of 84, concluding a lengthy and an amazing painterly career.

Most of the Norman Rockwell paintings make part of public collections across America today, but a lot of them were also destroyed in fires and other accidents. He illustrated books, calendars, postcards and other publications along with his work on canvas. His style is highly recognizable, narrative and likeable, encouraging a warm feeling and a familiar sentiment in a spectator. Today, Norman Rockwell paintings are considered iconic as much as the artist himself. 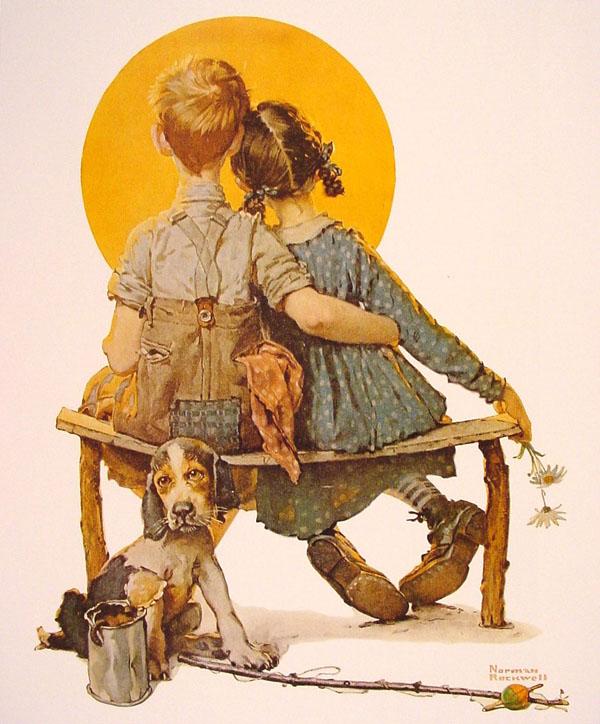 Boy and Girl gazing at the Moon, 1926
A romantic and iconic representation of two kids in love, looking into the moon. This is a typical early Norman Rockwell work, filled with sentimental idealism, illustrative and maybe even borderline kitschy. 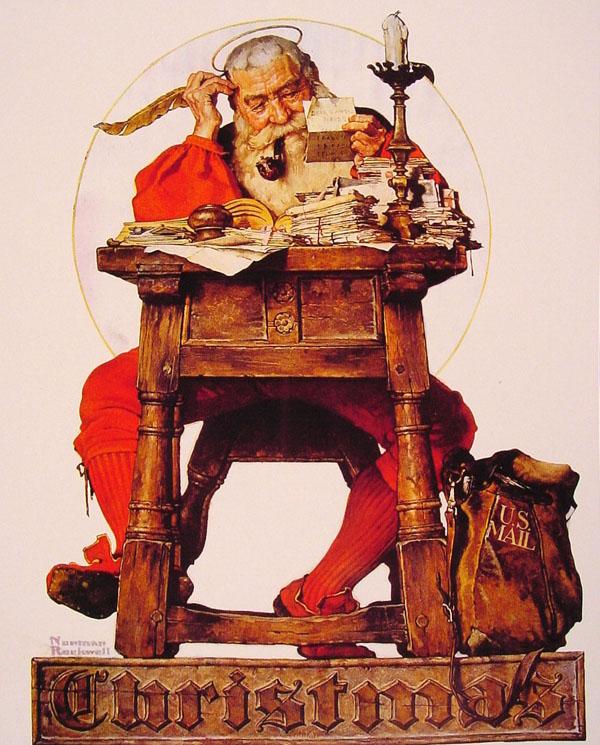 Christmas Santa Reading Mail, 1935
Another “everyday” scene of the painter. This time the main character is the imaginary Santa, but represented so realistically, fitting into the irresistible magic of Christmas holidays. 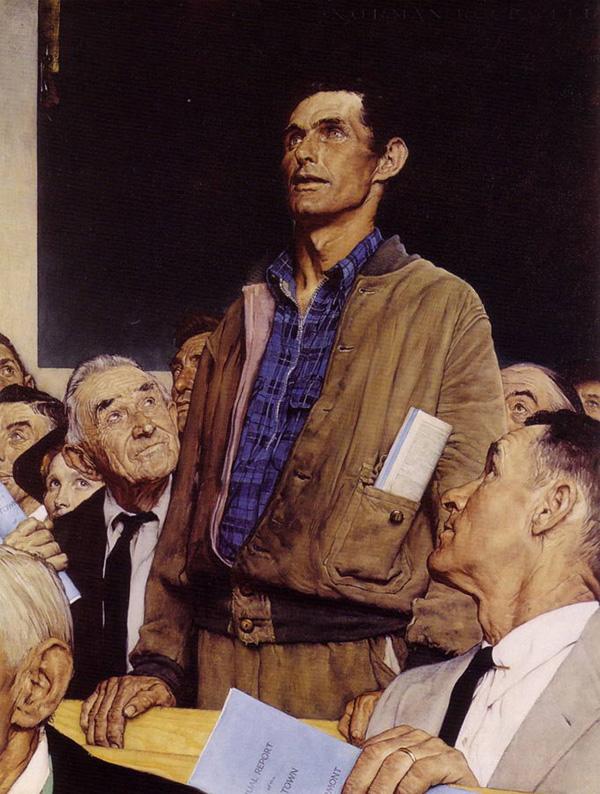 Freedom of Speech, 1943
One of Four Freedoms paintings inspired by the Franklin D. Roosevelt speech of 1941. This painting was published first at The Saturday Evening Post, followed by an appropriate essay. Norman Rockwell thought this one and Freedom to Worship were the best of the series. The painting is likely to represent an actual event. 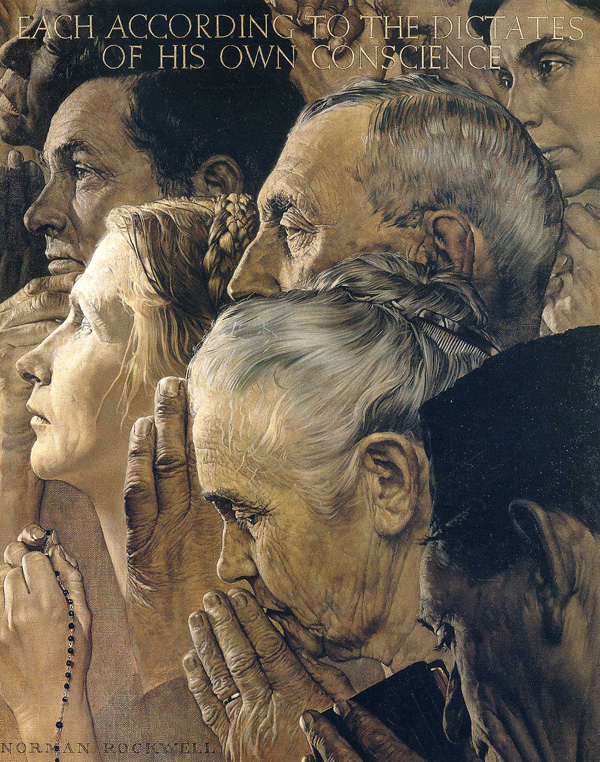 Freedom to Worship, 1943
The second of the Four Freedoms paintings series. The strength of the painting lies in the close-up portraits of the archetypal characters, with distinctively devoted expressions, standing for everyone’s right to honor their religion. 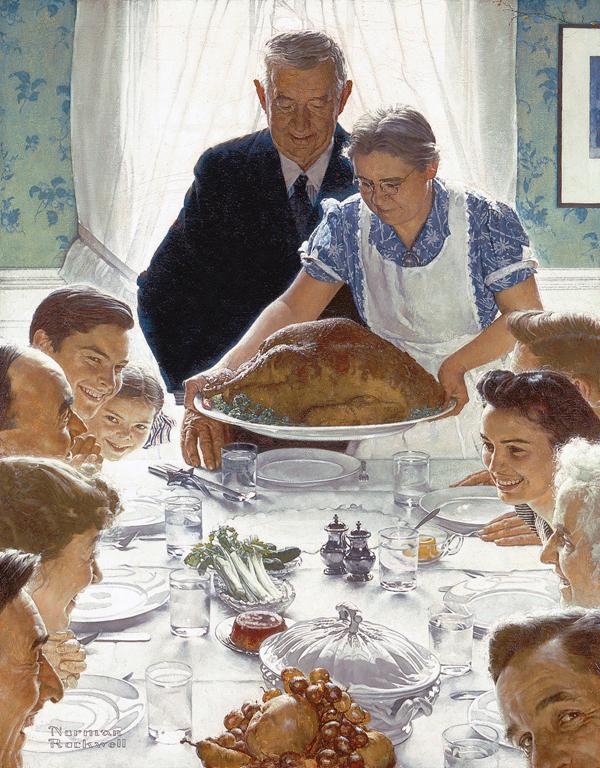 Freedom from Want, 1943
Third of the Four Freedoms paintings series. All of the portrayed people are friends and family of the Rockwell’s, in the Thanksgiving Day dinner scene. The painting is considered one of the most iconic representations of the Thanksgiving holiday dinner. 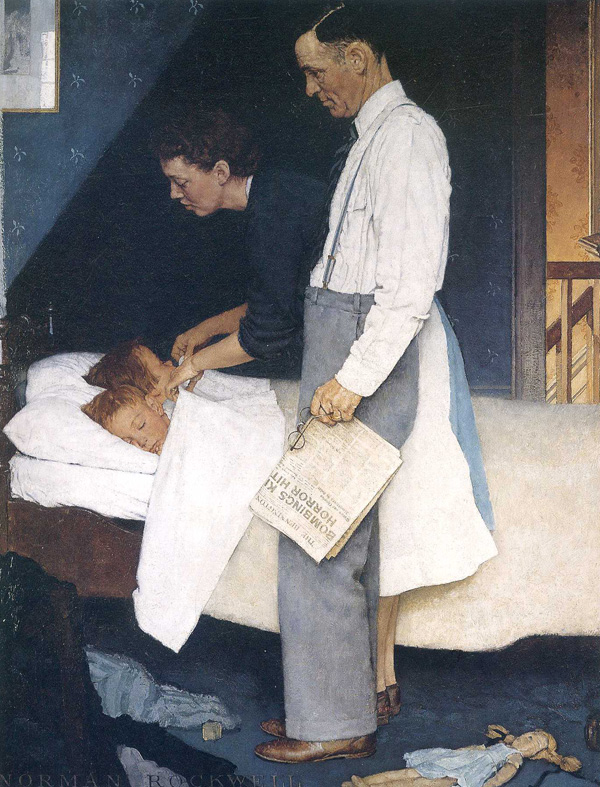 Freedom from Fear, 1943
The last of the Four Freedoms paintings. This paining addresses the World War II directly, since the scene shows parents tucking in their children, while outside The Blitz, strategic bombing of the United Kingdom by Nazi Germany, is raging. 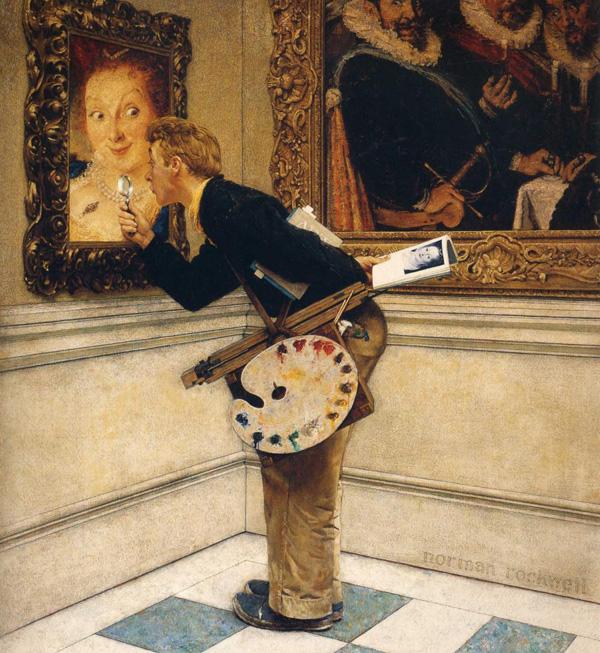 Art Critic, 1955
As Norman Rockwell was officially dismissed as little worthy by the official art critics during his lifetime, this painting is a humorous commentary on their trait. The artist pictures an art expert trying over-eagerly to authenticate the work, while looking clumsy, nerdy and ridiculous. 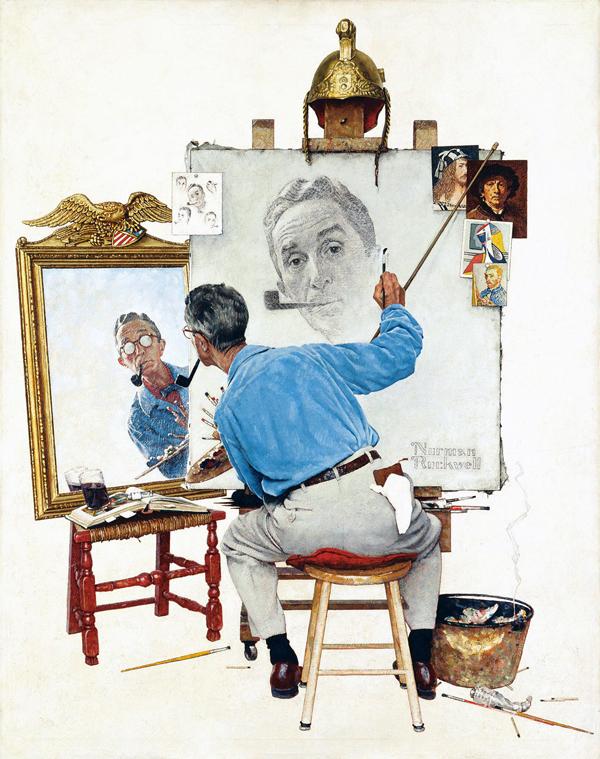 Triple Self-Portrait, 1960
The best known self portrait of the celebrated artist. It captures all three most prominent traits of his personality – humor, humility and his calling, along with a bunch of details taken from his everyday life. 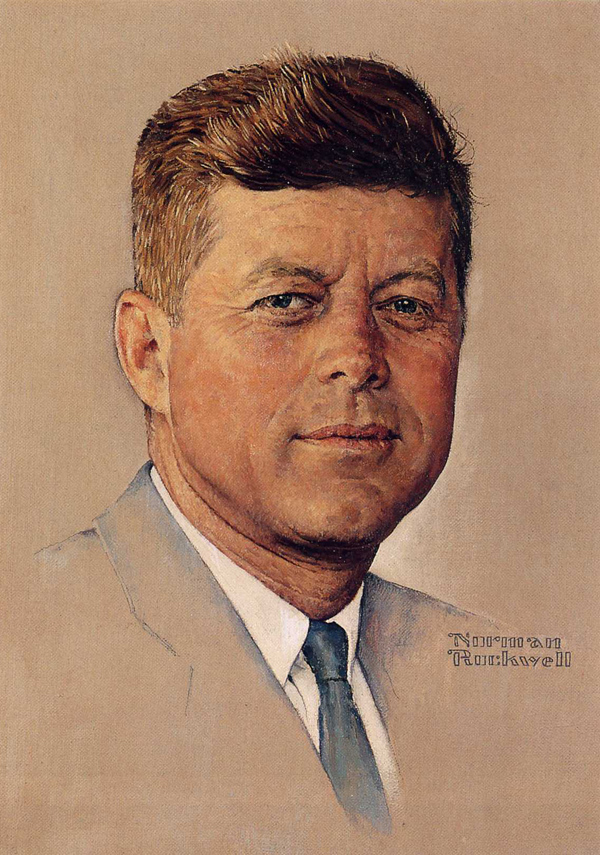 Portrait of J.F. Kennedy, 1960
One of the most famous portraits of the murdered American president J.F. Kennedy. The portrait was commissioned and executed before Kennedy became the leader of the nation and while he was a Senator and a Presidential candidate. 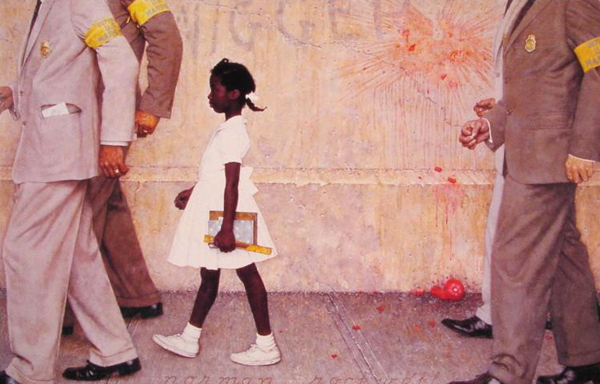 The Problem we all live with, 1964
One of the most famous paintings of the anti-racism civil rights movement. The painting shows a true event, when a little African-American girl, Ruby Bridges, started attending an all-white public school in New Orleans on November 14, 1960. The painting includes the viewer into a burning issue of racial segregation, which was ending in the sixties. 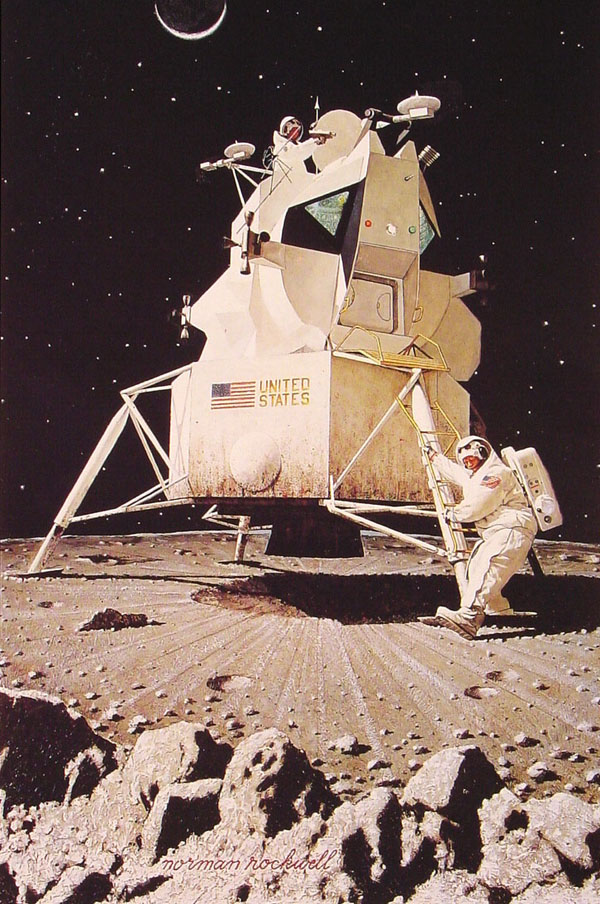 Man on the Moon, 1967
Norman Rockwell is somewhat of a chronicler of modern 20th century American society. This painting represents one of the most sensational achievements of the American Space program – the landing on the Moon. 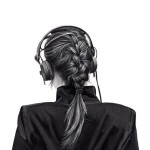 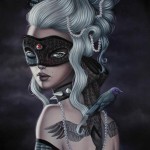 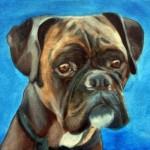